The brass quintet of the Orchestre de la Suisse Romande invites us on a musical stroll in the magical world of the circus with a colorful concert for both eyes and ears! This young audience-orientated performance was created in 2019 as part of the OSR’s famous “Concerts pour petites oreilles” of the OSR. For the Geneva Brass Festival, the musicians will be accompanied by circus artist Aude Cattin. A beautiful moment of music and poetry to share with the family!

Recommended for 4 years old and up. 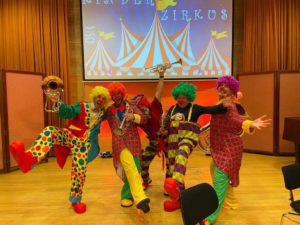 Founded in 1918 by Ernest Ansermet, who was its principal conductor until 1967, the Orchestre de la Suisse Romande (OSR) is made up of 112 permanent musicians. It gives subscription concerts in Geneva and Lausanne, symphonic programmes for the City of Geneva, the annual United Nations Day concert and accompanies operatic performances at the Grand Théâtre of Geneva. Over the decades, the OSR has built up an international reputation thanks to its historic recordings and its interpretation of the 20th-century French and Russian repertories.

One of OSR’s missions is to promote symphonic music to young people by offering them a wide range of activities. These include, in particular, educational performances, “Concerts pour petites oreilles”, “Concerts en famille” at Victoria Hall, school concerts, and rehearsals open to classes in collaboration with the Swiss Department of Public Education (DIP).

Born in Switzerland, Aude Cattin has demonstrated, from a very early age, an exceptional talent for acrobatics, juggling, aerial acts, trapeze numbers, music and literature. She has received a diploma in Literature and Circus Arts from one of the most important circus schools in France, École de Châtellerault, where her unusual capacities and talents were praised by her mentors.

At the age of seventeen, she traveled to Canada and started her studies at the prestigious Quebec Circus School. It is at that crucial moment of her artistic development that she discovered two disciplines that would later become her most impressive strengths: Cyr Wheel and Hat Juggling. She subsequently developed and perfected her skills, to become one of the world’s greatest specialists in those two fields.

Aude Cattin performs regularly with numerous circus companies and also as solo artist, in the United Asia, Canada, Japan, and Europe. In the last few years, she has developed a unique and very personal artistic language, wishing to establish a contemporary approach to circus arts. In addition, music has always occupied a very important role in her shows. As a musician, she frequently performs piano, accordion or trombone in her own circus shows, in addition to incorporating poetry and literature.

Strongly engaged for charitable causes, Aude Cattin has recently performed in various prisons in Germany and Italy, as parts of a collaboration with the Instant Acts Association.